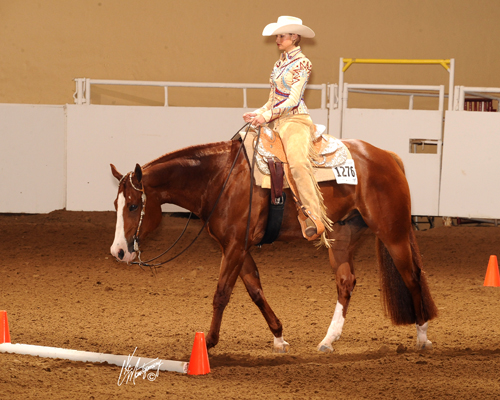 I’m sad to report that one of the greats has passed away.  11 year old APHA gelding Predictably Perfect also known as Knowtorious AQHA was laid to rest.  After winning multiple world championships on the APHA circuit, he then crossed over and did the same in AQHA competition.  Susan Wilson, his owner at the time of his passing was quoted this morning as saying:

“He was really special to a lot of people, not just me, and I was really lucky to have him in my life,” Wilson says. “He really meant a lot to me and my sister. Everyone has been so devastated by this, and it was the hardest decision I’ve ever had to make.”

“He had degenerative joint disease, and we tried very hard to find a way to make him comfortable, but it just wasn’t possible. He was just eleven, so he was a fairly young horse when you think about it. He just had his birthday the day before he passed.”

“He was really in his peak and had so much success with a lot of people, especially Lexie [Alexie Estrada]. The hardest part of this was getting ahold of her and everyone else to make sure they had a chance to say goodbye. He was more than a horse for many of us. He was a best friend, and he deserved to see the people he loved.”

Alexie Estrada was “Jaxon’s” previous owner who showed him in APHA competition.

Our hearts go out to the families and everyone who was touched by this amazing horse.