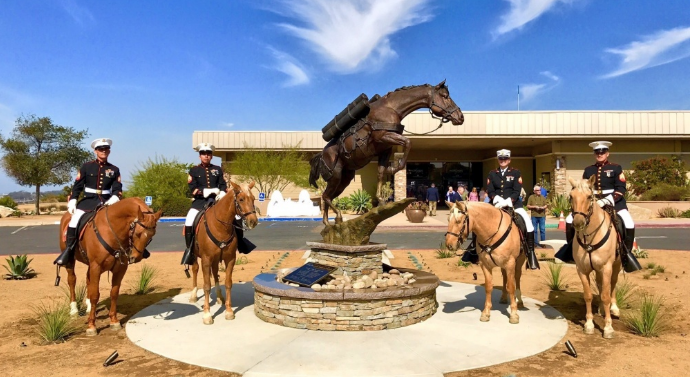 “I never expected to see a horse in the middle of the chaos in Korea,” said Harold Wadley, a Korean War veteran who served with Reckless. “Reckless supplied about 9-thousand pounds of ammo while receiving heavy artillery fire.”

Reckless’ finest hours came at the Battle of Outpost Vegas in March of 1953, where she made 51 solo trips in a single day, transporting 386 recoilless rifle rounds to the front lines. As Reckless took care of the Marines, the Marines took care of her, shielding the war horse with their flak jackets to protect her from heavy enemy fire.

“She was a herd animal and the Marines became her herd,” said Jocelyn Russell, sculpture of the Staff Sgt Reckless monument. “For her to be turned loose and to walk across mine fields and heavy enemy fire all on her own I learned a lot about her loyalty to the Marines.”

After serving in the Korean War, Reckless’ final duty station was Camp Pendleton where she stayed until her death in 1968. Reckless was buried with full military honors.