Paralyzed Equestrian Is Chasing Her Dreams To The Para Olympics!

Alanna Flax-Clark is a woman of many talents in the ring and outside. She did her undergraduate degree in B.S. in Biology and Psychology at Rhodes College in Memphis TN. Alanna also got her graduate degree in M.S. Education Specializing in Severe Special Needs Children at the Simmons College in Boston MA. She has spent time volunteering at St. Jude Children’s Research Hospital in Memphis and worked with disabled children. Ms. Flax-Clark has had the opportunity to work alongside the division chief of Radiology Oncology in the clinic, and also doing research on the effects of radiation on cognition, attention and memory in children with brain tumors. But these are just a few things that Alanna has accomplished, another majority of her time is spent training for the Tokyo Paralympics 2020 in para dressage. 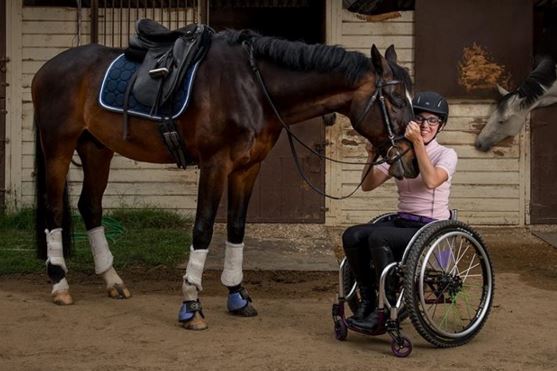 Alanna hasn’t always been paralyzed, when she was thirteen she woke up one morning and couldn’t move her right foot, let alone walk. Her symptoms would progress to the point of her being bedridden because of the excruciating pain. After spending days in the hospital and meeting with numerous doctors they finally got a diagnosis.  Chronic Neurological Disease associated with dysregulation of the central nervous system and autonomic nervous system that results in multiple functional loss in the bones, muscles, nerves, skin, and blood vessels. Working with her doctors she was able to get her symptoms under control and live a pretty normal life. But in 2007 her life would take a turn for the worse, her health started to decline again her immune system got week. She got extremely ill with an infection and ended up in the ER. Alanna was spiking a fever, her blood pressure became dangerously low and her heart rate was high these symptoms added to her disease had caused her to lose function throughout her body, she couldn’t walk and had limited use of her upper body even her voice was weak. Her immune system and the infection had attacked her nerves spreading so quickly that she was exhibiting signs of quadriplegia.  She went through countless hours in physical therapy and many different types, but it was not helping her get to being as active as she was before. She remember that while working with the disabled children she had learned of a program that used horses as a therapy for both the physical and mental disabilities of people. Being frustrated with her rehab she had seen the difference horse therapy had made in others and she wanted to be challenged every day. Her doctors wouldn’t sign off at first but she wouldn’t back down till they would let her.

She went to a local therapeutic riding center and used one of their horses for therapy. It was amazing Alanna felt free on a horse, riding focused on what therapy does but the horses gaits are much like a humans so it worked the muscles she needed to work on in order to get further in her recovery. It wasn’t easy but it was worth it. Fast forward a few years, she now trains with Lehua Custer who is USDF Gold Medalist and trains at the LA Equestrian Center. Lehua has kindly lent her 19 year old Swedish Warmblood Ramazotti 75 to Alanna to ride. Ramazotti is a Reserve Champion in 3rd level Freestyle Dressage for USDF Region 7 Veteran of young riders and junior circuits. He also won two gold medals at the 2015 Special Olympic World Games held at the LA Equestrian Center! He is a wonderful horse and very aware of a riders needs and becomes protective of his rider and is very calm. The moment he hits the show ring his character shines through and becomes very fancy. 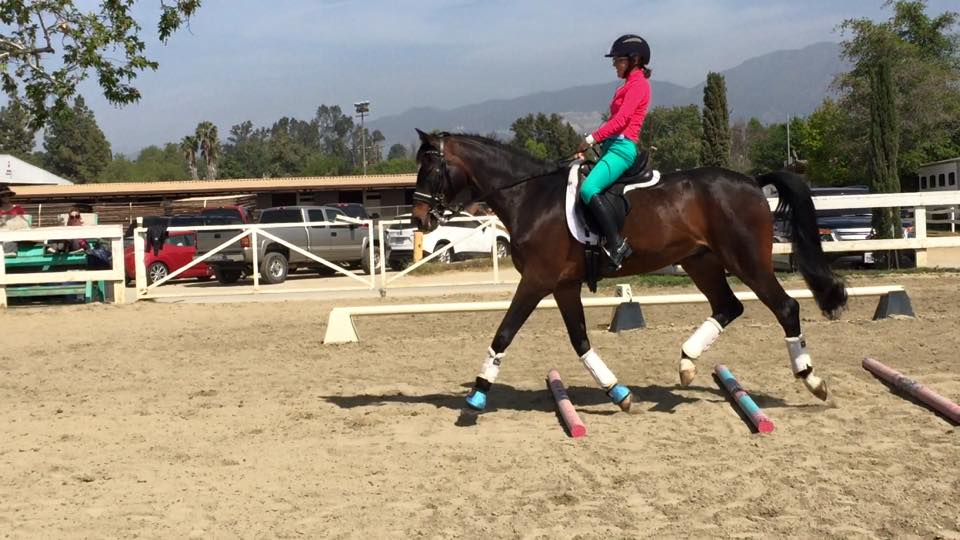 Riding for Alanna is a little different due to her not being able to use her legs at all. So she uses a rubber band to hold her feet in the stirrup but the can break if anything were to happens. Alanna rides with two whips that act in place of her legs with the additional use of voice commands she is able to cue her horse. Not having much use in her hands she has to use a loop rein that goes around her wrist, the length of the reins can’t be adjusted some moves require her body to move. For example, a free walk she needs to lean forward in order to lengthen the reins. In order to reach the 2020 Tokyo Paralympics Alanna has to qualify to get a spot on the Olympic team. She needs to first qualify for a starting spot for the National Paralympic Committee (NPC) and obtain an eligibility score which certifies the horse and rider combination have the required skills and experience to compete. These scores can be obtained at certain CPFD13 Shows. She also will need the help of sponsors to be able to financially support her goal. She currently has a few sponsors that have graciously stepped in to help; Box Wheelchairs, Supracor Dressage Extentions, Spinergy, the Challenged Athletes Foundation and The RIM Foundation.

Alanna does a lot of other things in her life and is very active. She participates in sports like basketball, tennis, kayaking, and even zip lines. She doesn’t allow her disability to stop her from doing things she wants to do. Horses allows her a time of freedom and empowerment, when she is on the back of a horse you can’t tell she rolls around in a wheel chair. When riding she is viewed as any other rider and is treated so. Life throws many curve balls and unpredictable circumstances, so when you hit these bumps in the road what will you do?  “Strength doesn’t come from what you can do, it comes from overcoming the things you thought you couldn’t”

Written By, Jona Lane. Video Footage from Documentary film : “What Do You See?” By Patricia Perez.  To support Alanna on her journey visit http://www.gofundme.com/paradressage.  Share this on Facebook if you think Alanna’s strength and determination is amazing!