Madera Ranchos, California is no stranger to animals running on the roadway, but recently that daily occurrence turned into a fairy tale sighting.  Witnesses called into the local sheriff’s department stating they were traveling on 12th avenue and that they were seeing a white pony with a pink halter with a horn. Yes a horse with a horn, isn’t that a unicorn? 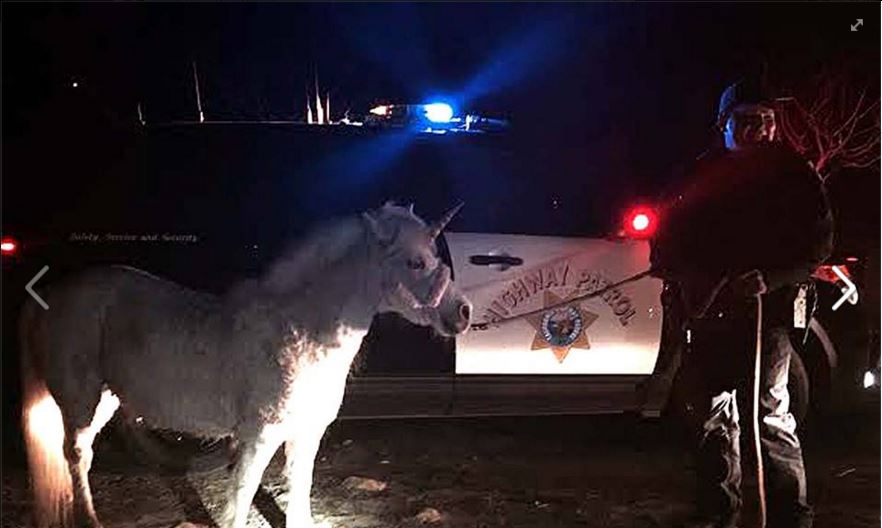 Joshua Mc Connell a local officer stated the pony had originally darted away from a party about 2:30pm, but was recaptured. Later that night the unicorn escaped the party again about 5:30pm. This time this little pony sent local officers on a high speed pony chase, darting in and out of traffic for hours. After chasing the pony it started to get dark and they needed to find a better way to find this pony. With an animal running through traffic it can cause an abundance of wrecks and injuries. The sheriff’s department decided to have the helicopter that was equipped with heat seeking radar to help find this needle in a haystack or as it were said a unicorn in California.

This heat seeking devise helped the officers find the pony in the dark, it was found in a nearby orchard where a resident with another horse helped officers approach and finally captured the pony Hours after the first sighting of this unicorn in a pink halter. The myth was debunked and was proven to just be a white pony, with a pink halter with a horn strapped to it’s head. Luckily there were no wrecks or injuries reported. This fairy tale was supposed to make a little girls dream come true on her birthday, but ended in Californian’s questioning weather unicorns were real or not.

That poor pony must have been so scared.  We’re glad she’s alright.  Share this on Facebook if you know a pony or two who’d do just about anything to escape a child’s birthday party!