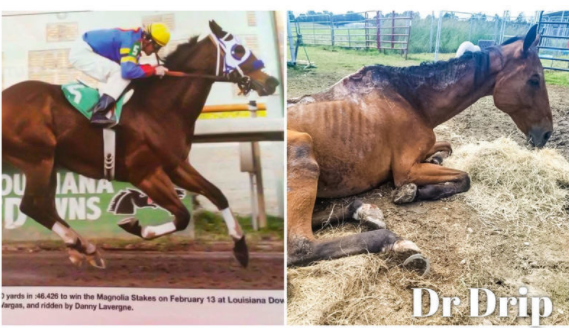 On Tuesday June 20, 2017 the St Landry Parish Sheriff’s Department and Animal Control responded to an animal cruelty complaint.  The sheriff’s department took swift action and seized the equine.  The equine, now known to be Dr Drip, a champion racehorse, was in horrific condition.  Not only had he been starved to death, he was also suffering from burns down his entire back.  As if that was not enough, Dr Drip’s flesh, open wounds and exposed bones were infested with maggots, to the point that witnesses heard the maggots feasting on his flesh and bone.  Dr Drip’s vertebrae was fully exposed in several sections in what appear to be “saddle sores” indicating he had been ridden in this condition.

On the Morning of June 21, 2017 Dr Drip went down and when urged to get up, his rotting flesh slid off his body.  The pain he suffered in the hands of his abusers is unimaginable.  Though he had the will to live, his body could not match his will to live. Dr Drip’s shell of a body surrendered that will and he had to be euthanized.

The persons responsible for this heinous and deliberate act of aggravated animal cruelty must face justice.

Thank You for your attention to this case, we look forward to a full investigation by post-certified law enforcement officials and an arrest under the Louisiana aggravated cruelty to animal statutes and full prosecution followed by maximum sentencing.”