Before we get into the ” real cost” of rescuing from Kill Pens, we should  start by saying we believe every single horse deserves a chance at life. No horse deserves to be in a kill pen or to suffer the horrific journey to slaughter. There is nothing more difficult than scrolling through your timeline on Facebook and seeing the faces of those horses staring back at you.  We want to save them all, but what is the “Real Cost”?

For those of you who missed it, recently Greg Stanley, one of the largest kill buyers in the US, wrote the following post explaining why the price of kill pen horses has increased so dramatically.:

“Hello all horse Rescues , Its Friday afternoon we have had a busy week with lots of horses on the move. The reason for this post is that my family is torn in what too do in this business of rehoming theses horses .What the problem is the Mexican horse plants have discovered that they are getting alot less horses than what they where,so they have major concern in what to do .So they have contacted my brother an they have raised the price of the horse business to insure they get the product. Thats the reason All the horses have got more expensive.An that why alot of you have been complaining.Just like i Said from the start we are Strictly horse people family people business people ,We have had threats on our familys ,have been talked to ugly thats ok i understand that most people are just tryin to vent al ittle .We are the biggest horse shippers in the World NOt just in the states So if we cant buy horses cheap ,then are not to be Had.With that being said From the start i said we are not tryin to sale riding horses i simply show the ones that will ride hopin it might make them bring a little more an up there chance to being rehomed. But it will be a whole lot Easier to put them on truck.With that bein said i didnt post this to hurt no ones feeling or step on anyones toes i strictly trying to state what we are up against.These other little Kill Pens are no threat to the horse industry.It is easy to find out who does the business it public knowledge Thanks Greg Stanley”

This begs the question, what are “a lot less horses”? Considering well over 150,000 horses a year ship across our borders to  Mexico & Canada every year, are we talking a few hundred less? Thousands less?

As of 4/8/2016, According to the USDA,  there were 650(3.64%) fewer horses exported from Texas(Mr Stanleys Port of choice) to Mexico. Honestly, a drop in the bucket compared to the thousands of horses he is shipping and hardly warranting a call from Mexico….Things that make you go hmmm??!!

Lets assume for a second that Mr Stanley is telling the truth and  Mexican slaughter plants have raised the “per pound” price on horses.  Does this mean that the “broker programs” and the rescuing of kill pen horses are increasing his profit on both ends? Mr Stanley should be jumping for joy, not “torn”.  One would think, if they truly are shipping less horses the buyers would drop the “Price per pound” not reward his suppliers by raising it. Is it just me??

It is common knowledge, among the rescue world, that kill buyers have contracts with the meat buyers.  They have a quota they must fill every month.  These quotas are filled! With the onset of the “Feed lot Frenzy”, Kill buyers have found a secondary market in us, the rescues.  They know the rescues will scramble to save a horse if they put a “ship date” on that horse.  We have been guilty of doing quite a bit of scrambling ourselves!

As they say, “Every action has an equal and opposite reaction”.  We have created a vicious circle and are now caught in the middle.  Remember we said Kill buyers have a quota to fill?  The same amount of horses are still being shipped, quotas are still being filled. So where are the horses coming from that they are selling to us? These are horses that were purchased with the intent to sell to the “public”. 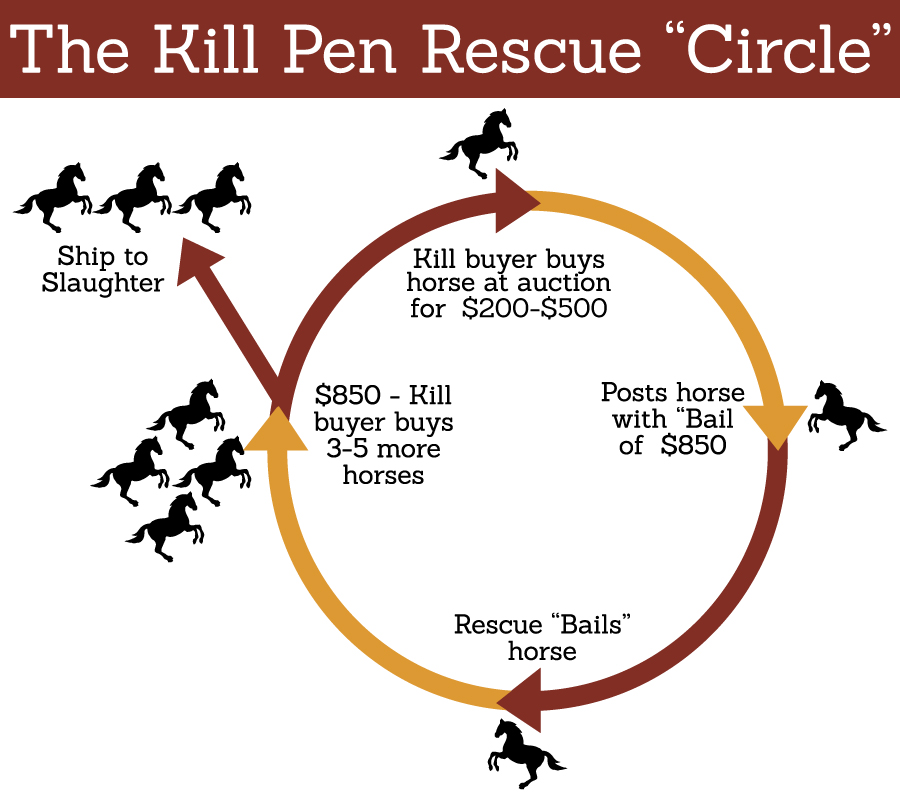 These horses are purchased from auctions and from Craigslist ads among other places.  The result of the “Feed lot Frenzy” is that now, Kill buyers will out bid rescues at auction because they know we will pay them more to save them.  Some of them will resell the horses in the parking lot of the auction to rescues for an immediate profit of $200 – $300, cause they are such nice guys!  Every horse we pay “bail” on , the Kill buyer will go to auction and buy 3 or 5 more horses, putting them at risk. Some we will never see and some he will post for sale to the public.  And the circle will continue.

We recently did a little research of our own. The results showed that in the past 6 months alone, the 4 kill pens who have the most activity on their broker programs have increased their prices an average of 19%.  Bastrop Kill Pen, Greg Stanley’s lot, has increased prices by 31%!!!

So whats the bottom line?

We are funding the Kill Buyers instead of funding the rescues.
And they are laughing their way to the bank!

In a recent posting on Facebook, with featuring an   Interview with a Kill Buyer , shows just how much they are laughing:

Q-What’s your opinion on these feedlot rescues?
A-I wouldn’t mess with the crazies and bunny huggers it brings out, but the ones who put up with it, they make a lot of money on these idiots, but you’ve got to take in a bunch of horses you wouldn’t ship anyway to sell to them. The preggos and the babies and the old bag of bones. Those are the ones those idiots pay money hand over fist for.

Although we would love to believe the slight decrease in horses being shipped this year was due to kill pen rescues (9.25%), we believe the decrease is due to the EU’s ban on horse meat from Mexico in December of 214.  Some would definitely argue this point.

The effects of the “Feed Lot Frenzy” sadly is being felt by rescues nationwide. With all of the donor money going to save these horses from kill pens, there is nothing left to help support the ones in our care. Horses at rescues are not being adopted, making it hard to rescue more.  At the end of the day…what is the REAL COST?  The real cost is there will be fewer and fewer rescues.  The real cost will be to the horses who need our help, the ones waiting to be rescued, the ones we could have saved before they were ever in the hands of the kill buyers.

You can help!  Support your local rescues, share their horses available for adoption, volunteer are near by. If you are a rescue, work with other rescues.  Together we can make a difference!

In closing, to you Mr. Greg Stanley..we call BS!!  Article From,  www.equineassist.org.  Share this on Facebook if you believe in animal rescue!