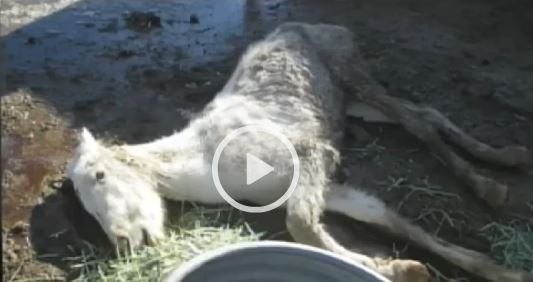 Animal rescue volunteers in Iron County are nursing a young horse back to health after it was found nearly dead and frozen to the ground.

“This is absolutely one of the worst cases in my career,” said Chris Johnson, an animal control officer with Enoch City.

The horse found frozen to the ground is estimated to be 1.5 years old.  Her and her mother were both rescued after a concerned citizen saw them emaciated and called animal control.  The young horse was laying in the mud and starving when animal control officers arrived at the scene.  She had no strength due to the lack of nutrition.  She was also suffering from hypothermia and only hours away from death.  She had an eye infection and sores on the side of her face from prolonged contact with the ground.  When animal control officers rolled her over, the indent of her body was still in the frozen ground.  The young horse’s mother was standing nearby in distress and also starving.

The young horse and her mother are now safe at an animal sanctuary and improving.  To read the full story please visit:  http://www.kutv.com/news/top-stories/stories/vid_9041.shtml