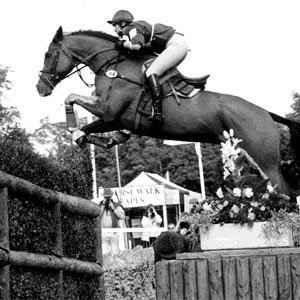 2006 Hall of Fame Inductee Biko (1984-2014) passed away on Wednesday.  Biko was a large, bay Irish Thoroughbred/Irish Draught gelding with a  white blaze.  He was a USA Eventing Legend.  He is ranked number 6 of the — USEA Top Ten All American High Point Horses of the Century.  In 1999 won the Horse of the Century Award from the — USEA.  In 1996 Biko helped the USA win Silver at the Olympic games.

During the induction ceremony, his rider Karen O’Connor described Biko:  “He had a full brother who competed the Grand National, amazing conformation, beautiful withers–which actually kept me in the saddle most of the time, great shoulder, wonderful length hip to hock.  He was an unbelievably good looking horse with impressive size at 17.3. He had an amazing work ethic and loved to be ridden every day, and an unbelievable gallop and incredible brain.  A gentle giant.”

An ambassador to the sport of Eventing, Biko was retired in 1999 at age 15.  He enjoyed his retirement at the O’Conner farm.  Our hearts go out to the lives who were touched by this amazing horse.